The formation of the International Centre for the Prevention and Prosecution of Genocide (ICPPG) in London was initiated by Transnational Government of Tamil Eelam (TGTE). The ICPPG, however operates as an independent body, serving all people who have been affected by or threatened with genocide. Its immediate focus remains the genocide that occurred in Sri Lanka. The ICPPG remains as an International Non-Governmental Organisation and an Independent Legal Body and one of our primary objectives is to collect evidence against perpetrators of genocide and work towards justice, peace and reconciliation 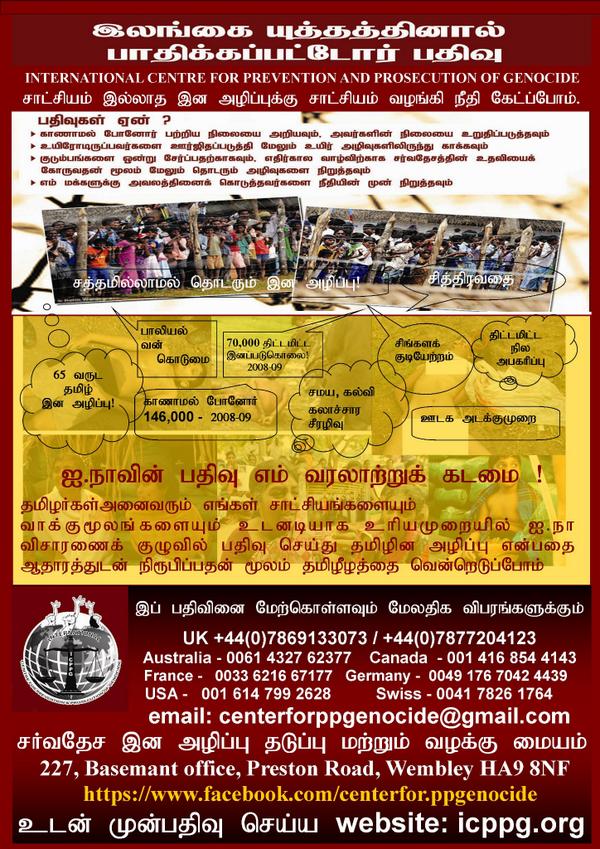 In its resolution A/HRC/25/1 adopted in March 2014 on “Promoting reconciliation, accountability and human rights in Sri Lanka”, the UNHRC requested the UN High Commissioner for Human Rights to “undertake a comprehensive investigation into alleged serious violations and abuses of human rights and related crimes by both parties in Sri Lanka during the period covered by the Lessons Learnt and Reconciliation Commission (LLRC), and to establish the facts and circumstances of such alleged violations and of the crimes perpetrated with a view to avoiding impunity and ensuring accountability, with assistance from relevant experts and special procedures mandate holders”.

The final report of the OISL commission was published in September 2015 confirming the serious violations, abuses of human rights and war crimes committed by the Sri Lankan authorities. In the basis of this report, we continue to work with international prosecutors with a view to brining criminal and civil prosecutions.

Join us & Become a Volunteer